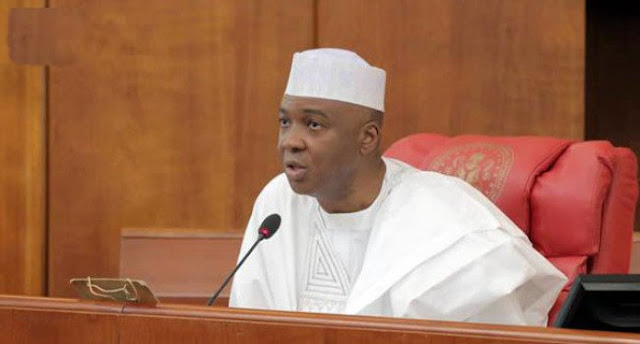 Some members of the House of Representatives under the aegis of Progressives Caucus, have berated the Senate President, Senator Bukola Saraki for criticising the Federal Government over the proscription of the Indigenous People of Biafra, IPOB.
The lawmakers described the statement credited to the Senate President as “shocking beyond belief.”

Saraki had on Monday faulted the decision of the Nigerian Army to proscribe IPOB.
But in a statement signed by three members of the House of Representatives – Aiyu Madaki, Sani Zorro and Mohammed Soba – the caucus also berated Saraki’s deputy, Ike Ekweremadu for showing support to the separatist group and its leader, Nnamdi Kanu.
The statement reads, “We were shocked beyond belief when our attention was brought to the statement credited to the Senate President, Abubakar Saraki in which he willy-nilly endorsed the murderous activities of the proscribed Indigenous Peoples of Biafra (IPOB), based on arguments that are bereft of reason, rationality or logic.
“In fact, a clear pattern of overt support to the leader of the terrorist group had since been established under the watch of the Senate President, for some time now.

“In the past his deputy, Senator Ike Ekweremadu, had not only hosted, but put the full paraphernalia of his office – bullet-proof cars, uniformed policemen and operatives of the department of the state security service (DSS), and full complement of his staff on our nation’s payroll, to give solidarity and support to a secessionist leader facing treason charges for levying war against Nigerians and the Nigerian state.
“On another count, only a self-hating leader devoid of human compassion could cover his eyes from the horror and bestiality being meted to Nigerians not indigenous to the so-called Biafra enclave over these past years, but will be excited at rushing to offer protection to Nigeria’s misguided groups, while thumbing down our nation’s defence forces that have continued to sacrifice their lives, so we may survive as a nation under God.
“Is the senate president unaware of the more than 1,900 Internally Displaced Persons presently taking refuge at the Aba Central Mosque, the more than 800 IDPs now sheltering in the Aba central police station after the gruesome murder of its Divisional Police Officer and his men?
“Is the Senate President not aware of the killing fields in Sabon Fili where innocent sellers of fruits were subjected to the gory, slow but painful deaths, or the killing of many and destruction of the property of Northerners at Oyibo, in Rivers State?

“What has he said about the premeditated murder of 9 other Nigerians of Northern extraction at Asaba, Delta State – all of which have been in circulation especially in the social media, in the last few days?
“It is indeed a tragedy of immense proportion if the Senate President will close his eyes to these genocidal acts, and instead attempt to incite an armed rebel group against state actors, just to score cheap political points.

“At this juncture, it has become necessary to ask all conscionable representatives of the Nigerian people, civil society activities, labour and its social partners, to stand up and be counted, by discharging their civic responsibility of exposing what is undoubtedly another hot pursuit against the Roghinga’s of 21st century Nigeria.”
Oh